Our adventure through Europe rightfully began in one of the most historic places around the globe: Athens. After 17 hours of travel we watched as Greece came into view below our plane window. From the air, we had seen the sun set over the east coast and the sun rise over the U.K. and, now, we were watching the sun sink again, this time behind the islands of our first destination.

My knowledge of Greece stems primarily from middle school social studies and my ongoing addiction to Mamma Mia!. So, beyond the rich history and profound ancient architecture, I had little to no idea what we might discover when we landed. But what I could see from the sky was surely captivating.

Athens was not what I expected even despite my lack of expectations.

Landing in a foreign city after dark can prove difficult for many reasons, the first being that it provides a skewed first impression of the destination.  I have yet to find a place that didn’t pleasantly surprise me once the sun came up.  Often times, this is purely due to the fact that I am female, navigating an unfamiliar city for the first time under a blanket of darkness.  But even with Josh walking alongside me, there was an uncomfortable looming sense that I would not find Athens to be the place I thought it was.

And, as it usually is, my gut was right.  But not for the reasons I thought.

The Guards of the Acropolis

Out of the 23 countries I’ve been to, I have never in my life seen so many cats prowling around such a metropolis area.  They were everywhere.  Hanging out in store fronts, wandering down the alleyways, scavenging through dumpsters, and doing parkour up the city walls.  And at every attraction they were lining the security fences, watching with caution as we approached.  But perhaps most shocking, was that they appeared to be well-fed, well-groomed, and perfectly happy to be meandering about while Athens bustled noisily around them.

They were the sleeping neighbors on benches, the table companions at restaurants, and the guards of the Acropolis.

At dinner one night we accidentally befriended a local restaurant fiend as he circled our table looking for scraps.  Although we didn’t feed him, we soon came to find that food was not the only thing he was searching for.  At one point, Josh leaned down to pet him, giving his ears a scratch and letting the cat lean into the back of his hand with affection.  And then, all of a sudden, there were cat paws on my lap, and the little guy was nuzzling his face into the palm of my hand.  I sat at the table in shock, unsure if my reaction was due to the incredible cuteness of the animal or the sheer audacity of this cat.  He curled up into a ball and began kneading my leg, letting me know that he was there to stay.

Feral cats are common in Athens and, as we’ve found in Aegina, even on the surrounding islands.  There are a few proposed reasons for this:

Whatever the reason that cats have claimed Greece as their own, Josh and I considered the unexpected addition to our trip a welcomed surprise. 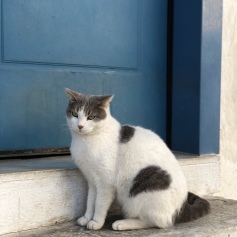 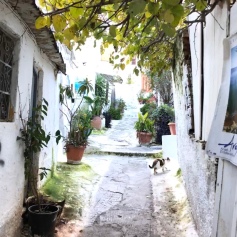 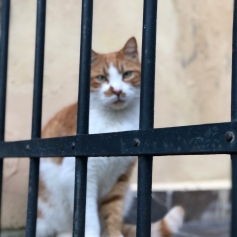 The Writing on the Walls

I have seen my fair share of street art, slathered across walls in creative renditions of cultural and societal expression and orchestrated as living pieces that function as everyday objects.  But Athens surpassed all levels of volume as every surface we approached was decorated with street art and graffiti.

I just don’t think I possibly could have anticipated seeing an ancient city dripping in spray paint.

Many of the pieces we found were captivating, boasting with artistry and careful planning.  But some were apparently thoughtless, a branding marked with haste just to say they left a mark.  Despite our shock, a feeling that only persisted as we continued exploring the city limits, we welcomed the unique creativity of each piece.  Whether purposeful (or even legal), these works are a part of the Athens we were experiencing.  And it certainly made for an interesting adventure.

Graffiti has been a part of our cultural ecosystems since the beginning of time, if you consider the prehistoric cave paintings and ancient etchings of Pompeii.  Which, is why it was not only surprising to see modern day Athens covered in paint, but also beautifully attributed to the rich history of graffiti itself.

According to many, Athens is experiencing a graffiti “epidemic,” as the police have been unable to manage the vast number of artists amidst arguably more important issues.  In certain places, we could see layers of paint having covered multiple attempts at defacing the surface.  But, as we passed by, we wondered just how long that cover up might last.  Whether it be a boastful show of ability, a commissioned piece, or a simple desire to leave a mark in this world, Athens has enough visually captivating works of street art and graffiti to consume an entire days worth of exploration. 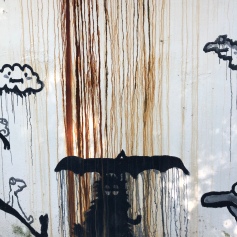 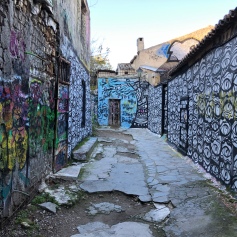 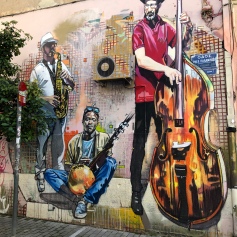 Athens may not have been quite what we expected, but it was undeniably embracing with its lively city life, beautiful landscapes, intriguing street art, and, of course, adorable felines.  10/10 would recommend.

Special thanks to Judy C., Amy I., David O., and Carollynne O. for their investment in the publication of Gui Ren!  Learn how you can add your name to this list and receive exclusive content by visiting www.patreon.com/FishtailPublishing